Symposium "North and South: Forms of Inequality within the International Politics of Scientific Production"

Since the 1960s, the North-South divide has been used to express spatial representations of inequality, resulting from the expansion of European colonialism and Western capitalism. While the North relates to geographies of wealth and development, the South became a symbol of the lack thereof and illustrated life in peripheral spaces. However, how does the compartmentalization of the world around geographies of inequality affect science production? The North-South divide has also produced structures of scientific dependency with resilient impact to the international political economy of knowledge production and circulation, reinforcing global inequalities.

This is the larger framework of the symposium North and South: Forms of Inequality Within the International Politics of Scientific Production, which happens at Schloss Herrenhausen, Hannover (Germany) from October 6 to 8, 2021, both online and onsite. This international conference is funded by the Volkswagen Stiftung, organized by Sephis Program and the GSSC-UniKöln, and convened by Prof. Barbara Potthast (University of Cologne), Prof. Claudio Pinheiro (Federal University of Rio de Janeiro), and Dr. Sinah Kloß (University of Bonn).

The North-South divide also relates to asymmetries in science, reinforcing structures of intellectual dependency that affect the international political economy of knowledge production and circulation. Does the North-South divide influence funding policies that impacts creativity and the diversity of ideas, theories, and methods in the sciences, and vice-versa?

More recently, the South has been instrumentalized to highlight the importance of diversity in sciences, allegedly more relevant to humanities than to natural sciences. However, does the South represent an option to the encompassing hegemonic intellectual agendas of the North? Can the South speak about aspects of social life apparently unrelated to the disparities in development – such as the constitution of the self, social identities, or other ontological conflicts typical of modernity?

These are some of the questions and perspectives to be discussed at the symposium with the aim of contributing to the analysis of practices that sustain hegemonies of power, obliterate diversity, and prevent the promotion of social justice in science. The symposium brings a trans-interdisciplinary approach that includes scholars from Astrophysics, History, Linguistics, Social Anthropology, Physics, Sociology, Philosophy, Mathematics, Cultural and Literary Studies, Geography, Education, and Gender Studies, which helps avoid the basic division between humanities, pure and natural sciences. Participants from both fields will engage in six panels, covering a range of topics: Ontological Diversity and Politics of Conviviality; Religious Studies and Human Sciences; Gender, Ethnicity Politics, and Intersectionality; Language, Translation and Circulation of Science; Politics of Geographical Imagination in Research and Funding; Inequality and funding priorities in science. Over 30 young and senior scholars will be gathered to discuss the lack of diversity in knowledge production, including the importance of theoretical diversity, intellectual creativity, gender balance, the role of language, the variety of ontological beings and forms of conviviality, and their impacts and limits on the capacity of science to promote of social justice.

Three keynote speakers will stimulate the discussions. Prof. Jocelyn Bell Burnell, an astrophysicist from Oxford University, one of the most prominent scientists of twentieth century, will speak about gender diversity on astronomy, a topic she has been consistently addressing as a major challenge to the progress of science at large. Dr. Burnell will analyze the historical records for membership of the International Astronomical Union, segregated by country and by gender, discussing how the fraction of the women membership has evolved comparing astrophysics with other physical sciences in academia. The importance of diversity will be discussed, taking the issue beyond that of gender alone. Opening the second day, Professor Farid Alatas, the eminent sociologist from the National University of Singapore, who will raise the question of how ‘International’ can be made ‘Universally’, addressing the impact of scientific asymmetries across the North-South divide. His longstanding commitment to analyzing academic dependency in knowledge production in historical and contemporary times also refers to how power sustains inequalities in science. The final day starts with the physicist and major voice on inequality in science Prof. Mohammed Hassan, from The World Academy of Sciences, will present his work on how the scientific and funding landscape in STI are affected by global inequalities. Professor Hassan will explain that although with dramatic transformations in science production and funding of recent decades has considerably narrowed the North–South gap in STI in some regions, it has stubbornly remained in many geographical and institutional contexts. According to the professor, this is most notable among low-income countries (LICs), where the lack of investment in STI has been a primary factor in the inability of LICs to build capacities in STI and deploy them to achieve Sustainable Development Goals (SDG).

Our transnational and transdisciplinary symposium concentrates on the critical potential of the South for accessing and challenging hegemonic agendas and funding priorities in science, sponsored whether by the state or through philanthropy. Speakers will explore the relevance of the South as a resourceful tool to address funding and publishing priorities in research and to shed light on international asymmetries in academia. Ultimately, the concept of South is not only addressed through ideas of geographies of inequality or critical positionalities, but as an attitude: a Southern Attitude, which embraces an invitation for amplifying forms of ethical engagement that address social and scientific justice at large. 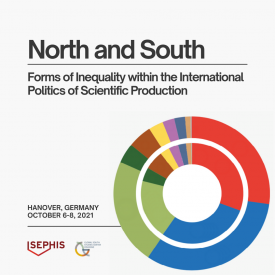 Download here the preliminary event brochure with detailed information about the general schedule, keynotes, panels, abstracts, and biodata about each person joining us.

Language, Translation and Circulation of Science
Ontological Diversity and Politics of Conviviality
Religious Studies and Human Sciences
Gender, Ethnicity Politics, and Intersectionality
Politics of Geographical Imagination in Research and Funding
Inequality and funding priorities in science